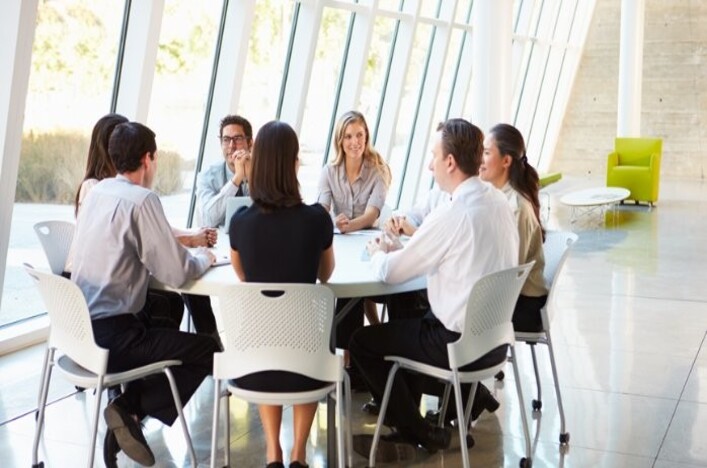 How To Run An Effective Weekly Team Meeting

When Alan Mulally became the CEO of Ford in 2006, he discovered that his senior executives spent too much time in meetings, so he quickly eliminated all unnecessary ones. However, he instituted a comprehensive weekly meeting to review strategic progress and discuss performance. The meeting took half a day, it followed a standardized agenda where the status of Projects and Tasks and Metrics (Key Performance Indicators) were color-coded, and everyone had to arrive prepared to speak to their results…

Every manager at Ford was held firmly accountable for their performance in front of their peers and left the meeting with clarity about what actions they needed to take before the next meeting.

(Mulally was CEO of Ford from 2006 – 2014. Ford returned to profitability under Mulally and was the only American major car manufacturer to avoid a bailout fund provided by the US government in the 2008 recession)

Although half a day meeting may sound excessive to many of you, Mulally knew what all successful managers know. Namely, that it is critical to meet to discuss performance and to hold people firmly accountable for getting things done on a weekly basis.

I have a saying: “Successful Business Execution is 20% giving people clarity about what needs to be done, and 80% following up to make sure it actually gets done”

Yes, transparency is important. Yes, making performance visible is important. But if you think that assigning Goals and Tasks to people on a dashboard is going to magically make things happen, I’m afraid you are deluding yourself.

While I maintain the 1-on-1 meeting a manager has with each of their direct reports on a weekly basis is the most important meeting you will have, it is also vitally important for the manager to bring the team together on a weekly basis so that everyone in the team can:

Good performance is praised and acknowledged. Poor performance is confronted. Next steps are agreed and documented. Everyone leaves the meeting with clarity about the most important Task they need to complete in the coming week. The team gets aligned and focused, and then everyone goes away and gets on with it for the rest of the week.

I suggest that you hold your Weekly Team Meeting at the same time every week. That helps avoid scheduling conflicts and establishes a steady cadence for the team.

You should use the same agenda at every meeting. Standardized agendas for routine meetings are powerful. They make it easier for people to prepare. Team members can build meeting preparation into their work rhythm.

Everyone must do the prework to make the time productive. Prior to the meeting, every person should update the status of their Goals and Tasks in your dashboard. I suggest drafting a Twitter-length status update for each Goal to explain what is happening, and demonstrate initiative by listing the next steps as Tasks with conservative due dates the team can count on.

Here’s a sample agenda for a regular Weekly Team Meeting that should take 1 to 2 hours:

(Sometimes Projects are reviewed as a separate, standalone meeting)

What’s the status of each Project? Are they on track to be completed, as scoped, by the due date? Any blockages? Lessons learned?

Confirm “The One Thing” – the most important Task that needs to get done in the coming week to move each Project forward.

Here is a set of “Task Rules” I have found useful to upgrade accountability and create a high-performance team culture:

(Sometimes Metrics are reviewed as a separate, standalone meeting)

Check the status of the high-level Metrics / Key Performance Indicators for each functional area. Are they red, yellow, or green? This should be more than a simple report on results. There should be discussion and even challenges. What’s happening here? What lessons can we learn?

Confirm “The One Thing” – the most important Task that needs to get done in the coming week to address any KPI performance shortfalls.

These should be topics that benefit from harnessing the collective brainpower of the team. They may be roadblocks that are preventing a person from achieving their goals. Or there may be an elephant in the room (a difficult issue people have been avoiding) that needs to be dealt with. Or there may be a key decision that would benefit from input and debate by the team.

Rank your Parking Lot items in priority order. That way you’re tackling the most important issue first. Here are a couple of other guidelines:

Set a time limit for discussing Parking Lot items and hold to it, even if you only discuss one item on the list. When that happens, you don’t want the other issues to roll over to the next meeting or simply stay unresolved. Always either resolve an issue or assign a Task for someone to take a specific action that will start the resolution process for each Parking Lot item (e.g. prepare a discussion document using the GROW framework).

If an item doesn’t require everyone’s input, don’t waste the time of everyone present. And if this type of discussion starts to occur, the facilitator should interject and say words to the effect of, “Let’s take this issue offline” and list the names of the persons who need to attend the problem-solving discussion as a separate meeting and have them report their resolution back to the team.

The Parking Lot is the part of the meeting where you’re most likely to have a disagreement and heated discussion. That’s OK. You should have productive conflict. If there is no disagreement, the chances are that you’ve got a dysfunctional team. Disagreement, even argument, is fine if people are constructively and passionately debating the issues and concentrating on those issues while respecting each other.

And yes, you do need to make a decision. Document each decision in the meeting minutes, and assign a Task to immediately put the decision into action.

Look at each person’s list of Tasks and single out the most important Task they need to complete in the coming week to move their area of the business forward. Make sure “the one thing” is clearly highlighted for each person and get agreement from the team.

Your Core Values are important because they guide decision-making. Everyone needs to know what the Core Values are and what they look like in real life. You can help that happen by making a Core Values Story a compulsory part of your Weekly Team Meeting. Here’s how:

Everyone is required to share a story of how someone else on the team has demonstrated one of your Core Values by their actions in the previous week. It’s a great way to make the Core Values clear and also praise people who’ve demonstrated them in their work. To save time, I suggest you get everyone to post their stories prior to the meeting in the following format:

I nominate (person) for living our Core Value of (value) – Followed by a brief description of what the person did in the previous week that demonstrated that core value in a concise Twitter-length statement.

Wrap up the Weekly Team Meeting with the One Phrase Close. Have everyone share one short phrase that captures how they feel or what they’re thinking at the moment.

The One Phrase Close can serve as a quick temperature check on team morale. Some people will say something motivating and upbeat. But others may say something that gives you a clue that they’re not as happy as they could be. Follow up with them later to see what’s up.

The Weekly Team Meeting is a powerful way to keep things on track and moving forward. But they gain strength when you do them every week. Let me warn you that you will be tempted to skip a week because there’s too much work or there’s a fire that needs fighting. Don’t give in to that temptation. Here’s the experience of a client who ran a publishing company, in his own words:

“Part of our operating ritual was the Monday morning all-hands meeting. In about an hour and a half, we reviewed performance and what we needed to do in the coming week. My team knew that I was a fanatic about the meeting because I felt that it kept us productive and on track.

When I was on an extended trip to South America, my team decided that they were just too busy to hold the regular meeting. In fact, they skipped the meeting two weeks in a row. Nobody told me that.

When we held the first meeting after I got back, it was clear that things had gone off the rails. Key performance measures hadn’t been met. Projects were behind.

That was odd, because my team always did well when I was gone before. It took a minute or two before one team member told me what they’d done. I turned that into a lesson for them about the importance of that weekly meeting, but it was a lesson for me, too. When you review every week, you catch problems when they’re small, and it’s easy to get back on track. Every week you miss, the problems get bigger, and getting back on track takes more effort.”

This article contains excerpts from the book: Business Execution for RESULTS.