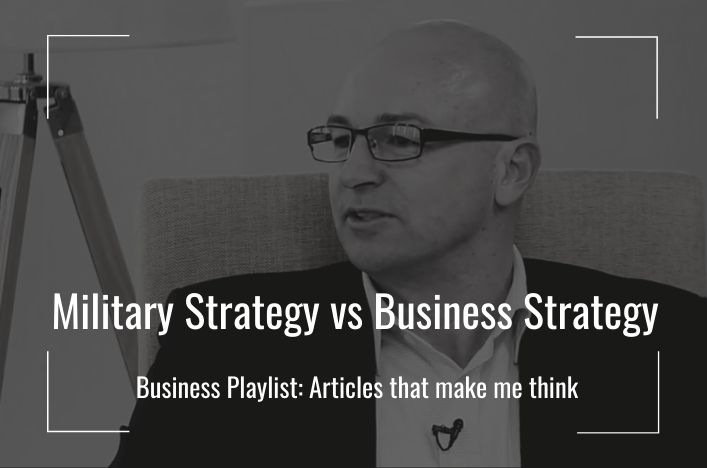 This week: How applicable is Military Strategy to Business Strategy?

Professor Roger Martin is a writer, strategy advisor and in 2017 was named the #1 management thinker in the world.

“From Sun Tzu: “The supreme art of war is to subdue the enemy without fighting.” The art of business strategy is to find a way to achieve your desired positioning and have your competitors largely satisfied with theirs, to create as positive-sum a game as circumstances allow. If competitors aren’t reasonably contented, you will suffer from prolonged warfare”…….In fact, you have to start thinking about peace before you even initiate battle. Again, from Sun Tzu, “There is no instance of a nation benefitting from prolonged warfare”.”

“From Sun Tzu: “Treat your men as you would your own beloved sons. And they will follow you into the deepest valley.” It is the polar opposite of the Robert McNamara-led prosecution of the Vietnam war. His strategy involved treating soldiers as disposable products……..Military leaders need to be steeped entirely in the history of combat and its terrible consequences. Perhaps McNamara was, but it sure didn’t appear that way.”

“Military strategy isn’t about command and control. There is full and explicit recognition that real choices need to be made on the battlefield, during the battle itself. Battlefield commanders set an intent and an approach to achieving that intent. But they fully expect the officers and soldiers serving under their command to have to make critical decisions on the battlefield as their work proceeds. They aren’t expected to simply execute, because that would be stupid. In fact, the more elite the unit (special forces, etc), the more recognition there is that they are not just executing, they are making critical choices as the landscape unfolds in unpredictable ways.”

My own articles with references to military strategy

I have written previously that some authors write dismissively of military leadership and its applicability to modern business. I wonder how familiar they are with how modern elite military units actually operate? They might be surprised to know that military leaders have overcome many of the challenges of managing people in the modern era, challenges that business leaders are only just beginning to understand.

I too am wary of overfitting military practices to a business context, but that said, there are many valuable lessons to learn:

My summary of the book “Team of Teams” by Stanley McChrystal

And, How to Write Better Emails. I can imagine you rolling your eyes at the title of this post, but there are valuable lessons the military can teach us to improve the effectiveness of email communications also.

How to Write Better Emails
Making Sense of Web3