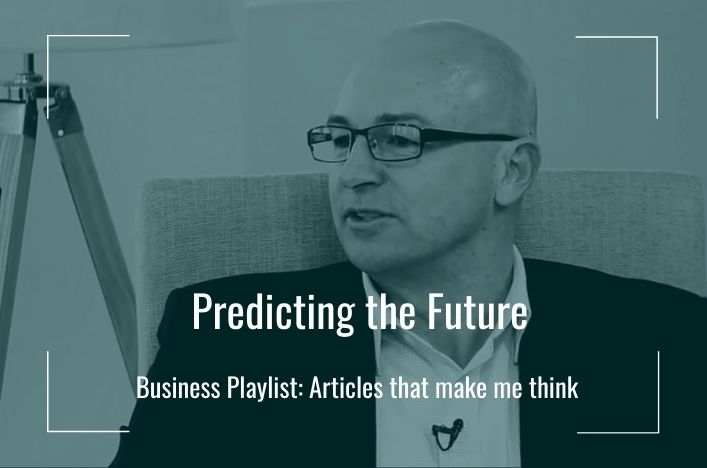 Predictions for the future

“Predictions for the future” articles are a dime a dozen at this time of year, and typically wafer-thin in their analysis. Most of them are regurgitated fluff and aren’t worth your time.

In a previous business playlist, I shared an overview of Gartner’s 2022 technology trends article, saying it, “…seemed derivative and padded out with their own brand of corporate gibberish.”

Today I point you to 2 articles about the future that made me think. Both are long reads, but a worthwhile investment of your time.

December and January are when I typically facilitate annual high-level strategic planning sessions with my clients. These 2-day sessions take a broad perspective and focus on industry trends and long-term strategic moves (vs the 1-day quarterly strategic reviews we conduct throughout the year which focus on strategy execution and short term strategic projects).

As part of the cadence of strategy execution, I recommend conducting a thorough industry analysis (at minimum) annually to identify inflection points that are occurring, or are likely to occur in your industry so you can make wise strategic choices about which direction to head in and what to invest in.

You don’t want to be blinkered by the “groupthink” and dogma of your own industry either. There is value in zooming out to take a broader macro view, and that’s where articles like these can provide additional context and insight.

The 1st article is from Daniel Jeffries – The Pathways of Tomorrow: Four Big Predictions for the Next Twenty Years

Daniel Jeffries describes himself as an author, futurist, systems architect, and thinker.  He fleshes out the following core themes in his article:

Daniel recommends adopting the following mindset to be a better forecaster:

Focus on categories, not current iterations of technology.

The current version of a technology may have limited capabilities, but if the overarching category has value, try to imagine what future iterations of the technology may be capable of.

Expect your current beliefs to be proved wrong.

Don’t mistake the map for the territory. Don’t mistake your current beliefs for reality. It’s easy to fall victim to confirmation bias – where you discredit information that challenges your existing beliefs or warp incoming information to reinforce your beliefs. Be willing to discard old ideas as soon as you have new, better information.

Think in probabilities, not absolutes.

Don’t think in binary terms e.g. yes or no, right or wrong, black or white. Instead, assign probabilities to how likely something is to happen e.g. 10%, 50%, 75%. But never assign 0% or 100% because life is too uncertain to be 100% about almost anything. When things change, update your probabilities to match the new reality.

Ask questions about every new societal development, idea and technology:

Some technologies and ideas, like socialism, cryptocurrency and genetic engineering are dramatic and divisive, sparking waves of legal and cultural backlash as well as violence. Don’t see it as a single battle but as a series of battles over time where one side may gain the upper hand only to lose it later. And you have to see how those battles add up to a war that eventually sees one side victorious.

“…the pandemic is the ultimate test of a nation’s intelligence, resourcefulness and adaptability. It’s a global experiment, with every country on Earth participating whether they like it or not.”

“…remote work will become the default way of doing business”

“…it will be a centaur world, with AI assisting us in everything”

“Eventually, nothing will be able to stop the evolution of money from nation state money to global currencies and private currencies, but in the next twenty years it will be a war between central bank digital currencies that have surveillance baked into every step, and decentralized money bound to no nation state.”

“In the end, the power of the nation state has likely peaked and society will get more global, more distributed and more decentralized once more.”

The 2nd article is from Howard Marks – The Winds of Change

Howard Marks is an investor and writer. He is the co-founder and co-chairman of Oaktree Capital Management. His “memos” are widely read in the investment community.

He fleshes out the following core themes in his article:

The content is USA-centric, so you may wish to skim parts that are not relevant to you. However, the big macro changes he writes about will likely have an impact on our lives for many years.

“…there’s a new world order. Words like “stable,” “defensive” and “moat” will be less relevant in the future.”

“…as technology and information play a bigger role in business and our lives, labor becomes less necessary.”

“…in other words, technology has the potential to boost GDP while adding to unemployment.”

“Baby Boomers have been and still are consuming more than their fair share of the pie. This will leave future generations saddled with substantial debt stemming from expenditures they didn’t benefit from proportionally.”

Who is Believable?
Insights from Alchemy