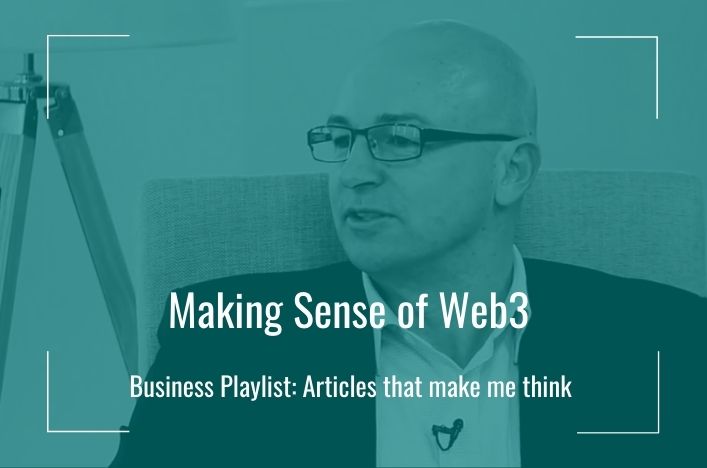 This week: 4 different writers help me make sense of the Web3 hype

During strategic planning facilitations over the past year or so, increasing numbers of clients have mentioned Web3 and Blockchains as being either a threat or an opportunity for their industry as part of their SWOT Analysis. These concepts have been the subject of frothy hype in recent years, particularly from giant VC firms like Andreessen Horowitz pumping their cryptocurrency investments.

I’ve selected 4 articles that (I hope) provide enough nuance to help us make sense of Web3, and summarized their key quotes:

Venture Capitalist, Rex Woodbury, of Index Ventures, is one of the newer writers I follow to help me learn more about technology trends. He provides what I perceive to be the “bull case” for Web3:

“In media coverage, “Web3” is fast replacing “crypto” as the catch-all term for a decentralized, secure, and user-owned internet. This is, in my mind, a good thing: Web3 connotes progress and innovation, whereas crypto connotes complexity, speculation, and a dozen other negative associations that have (unfortunately) calcified over the past decade and now threaten to derail the movement. Web3 may be a necessary rebranding.”

“But here’s the thing about Web3: most people will never know it exists. The reason for this is that while Web2 was a frontend revolution, Web3 is a backend revolution. In other words, Web2 reinvented the things that people interact with, while Web3 reinvents the plumbing behind the scenes.”

“Today, Web3 has yet to “cross the chasm”—we’re in the “early adopters” phase of the technology adoption lifecycle.”

“To go mainstream, Web3 needs to become accessible to the everyday person. One way to achieve this is through easily-understood metaphors that abstract away complexity.”

“…most people still don’t know what a blockchain is. What’s important is that that’s fine – they don’t need to, and they likely never will. The vast majority of people will never know that they’re interacting with a blockchain, as the complexities are hidden beneath beautiful and familiar interfaces.”

Venture Capitalist, Fred Wilson, of Union Square Ventures, made his name with investments in Web 2.0 companies such as Twitter, Tumblr, Foursquare, Zynga, Kickstarter, Etsy, and MongoDB. I have followed his writing for more than a decade. He has been around enough technology hype cycles to provide what I perceive as a “sober case” for Web3:

From Fred, “Over the last month, there has been a ton of debate and conversation about web2 vs web3 with many leading voices raising doubts about web3. Debate and doubt are healthy. And web3 enthusiasts, particularly on Twitter, remind me of missionaries trying to recruit the unwashed to their belief system. Frankly, it is all too much for me.”

“However, the debate is important, the pushback is healthy, and ultimately web3 will have to deliver on its promise which means teams building things that provide new unique value to society. If that doesn’t happen, then web3 will turn out to be the snake oil that some are suggesting it is. I am confident that won’t happen, but it is important to understand that the proof is in the pudding and talk is cheap.”

“The good news is there are literally tens of thousands of teams building new things on a web3 stack now. Some of the best entrepreneurs and developers have moved over. The tooling is getting better. It reminds me of the early days of web2 in 2001/2002/2003, when we started USV. That was also a time of great cynicism. We almost did not get our first fund raised. Nobody was buying the story we were telling. But of course, that story turned out to be true. And I am confident this one will too.”

Why it’s too early to get excited about Web3

Tim O’Reilly is the founder of O’Reilly Media, and has written about and popularised technology trends for more than 4 decades. I have followed his writing for more than a decade. He wrote a thought-provoking book that helped me make sense of the past, present, and (potential) future of technology: WTF?: What’s the Future and Why It’s Up to Us. Tim also provides what I perceive to be a “sober case” for Web3:

From Tim, “There’s been a lot of talk about Web3 lately, and as the person who defined “Web 2.0” 17 years ago, I’m often asked to comment. I’ve generally avoided doing so because most prognostications about the future turn out to be wrong.”

“I love the idealism of the Web3 vision, but we’ve been there before. During my career, we have gone through several cycles of decentralization and recentralization. The personal computer decentralized computing by providing a commodity PC architecture that anyone could build and that no one controlled. But Microsoft figured out how to recentralize the industry around a proprietary operating system. Open source software, the internet, and the World Wide Web broke the stranglehold of proprietary software with free software and open protocols, but within a few decades, Google, Amazon, and others had built huge new monopolies founded on big data.”

“Repeat after me: neither venture capital investment nor easy access to risky, highly inflated assets predicts lasting success and impact for a particular company or technology. Remember the dot-com boom and the subsequent bust?”

“Cryptocurrencies may well be the future of finance, but at the moment it’s hard to see what’s really working, given how much smoke is being blown. Yes, exchanges like Coinbase are making a lot of money, but unlike traditional financial exchanges, what’s being traded isn’t general-purpose money but a speculative asset class that may be wildly overvalued.”

“The easy money to be made speculating on crypto assets seems to have distracted developers and investors from the hard work of building useful real-world services.”

“The Dutch tulip mania from 1634 to 1637 is the classic example of a wild difference between the nominal financial value of an asset class and its intrinsic value. When the bubble popped, tulips went back to being flowers, beautiful but no longer worth a fortune, with no lasting impact on the prosperous Dutch economy. There have been many speculative bubbles since, and most of them have faded into the background noise of history.”

“There is another kind of bubble, though, identified by economist Carlota Perez in her book Technological Revolutions and Financial Capital. She notes that virtually every past major industrial transformation – the first Industrial Revolution; the age of steam power; the age of steel, electricity, and heavy machinery; the age of automobiles, oil, and mass production; and the internet – was accompanied by a financial bubble.”

“I like to remind people that I wrote “What Is Web 2.0?” five years after the dot-com bust with the explicit goal of explaining why some companies survived and others did not. So too, I suspect that it won’t be till after the next bust that we’ll really understand what, if anything, Web3 consists of.”

“Let’s focus on the parts of the Web3 vision that aren’t about easy riches, on solving hard problems in trust, identity, and decentralized finance. And above all, let’s focus on the interface between crypto and the real world that people live in”

“If, as Sal Delle Palme argues, Web3 heralds the birth of a new economic system, let’s make it one that increases true wealth—not just paper wealth for those lucky enough to get in early but actual life-changing goods and services that make life better for everyone.”

Scott Galloway is a Marketing Professor at NYU Stern and a popular author and podcaster. I have enjoyed his work for several years because of his “No BS” style. He educates me while making me laugh:

From Scott, “What is web3? It’s a hazy/vague term describing a crypto-powered internet, and a font of yogababble. Its promoters would say something akin to: Web3 is a decentralized version of the internet where platforms and apps are built and owned by users. Unlike web2 (the current web), which is dominated by centralized platforms such as Google, Apple, and Facebook, web3 will use blockchain, crypto, and NFTs to transfer power back to the internet community.”

“Using the word “decentralized” is a corporate sleight of hand that boxes detractors into a position of bad faith ….. Who wants centralization? That sounds bureaucratic, stifling, and corrupt.”

“The Wild West was decentralized. And we soon discovered that towns need sheriffs and central protocols (i.e., laws). Theft runs rampant on web3. Losses from crypto scams and thefts totaled $14 billion in 2021. Decentralization promised to replace the middleman (the bank) with blockchain technology, but instead it’s created a Coachella for fraud, where anonymity, yogababble, and complexity protect the fraudsters from oversight or accountability.”

“None of this is the technology’s fault. There is likely great potential in blockchain technology, tokens, and smart contracts, and much of this innovation will be enduring. DAOs (Distributed Autonomous Organizations) offer the potential to modernize organizational and corporate governance, a cornerstone of American capitalism that is still largely misunderstood by the public. NFTs (Non-Fungible Tokens) offer the potential for creators to be better compensated for their work.”

These articles certainly made me think.