Business Lessons from Team of Teams 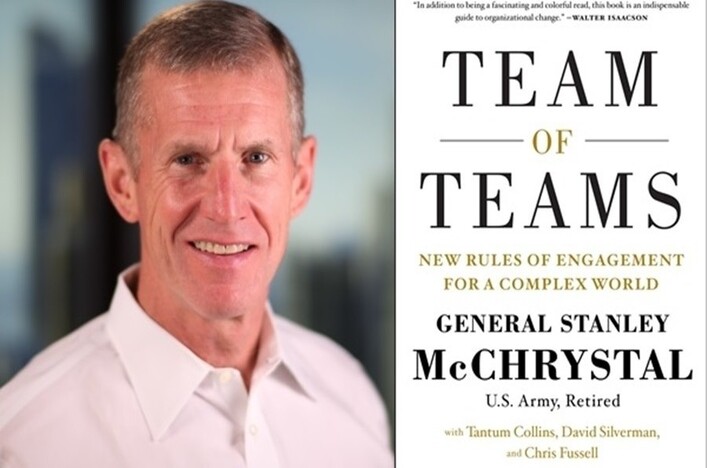 Business Lessons from Team of Teams

I have written previously that some authors write dismissively of military leadership and its applicability to modern business. I wonder how familiar they are with how modern elite military units actually operate? They might be surprised to know that military leaders have overcome many of the challenges of managing people in the modern era, challenges that business leaders are only just beginning to understand.

Previously, I reviewed and summarized some key lessons from the book Extreme Ownership by two former Navy Seal officers who served in Iraq and now run a successful leadership consulting practice.

In this article, I summarize some of the key lessons I took from the book Team of Teams, written by retired US Army General Stanley McChrystal who led the Joint Special Operations Command (JSOC) in Iraq in the mid-2000s. Why am I not surprised that the general and his fellow authors have also formed a successful management consulting practice?

Note: McChrystal is a controversial character, and understandably, people have strong views on the Iraq war. I am also wary of overfitting military practices to a business context. That said, I thought there were many great takeaways in this book. Here is my summary of the key business lessons from Team of Teams:

Ever since the days of Frederick Taylor and the Scientific Management revolution in the 19th century, businesses have looked to create efficient, scalable processes in order to operate and coordinate the activities of people as organizations increase in size and scope. The military has been no exception. Every soldier gets trained in “the one best way” to perform their specialized role, so they can be counted on to act in a consistent manner on the job, and replacements can quickly be slotted into any position without missing a beat.

Efficiency and processes remain important, but the ability to adapt to increasing complexity and change has become more important now, especially when confronting unconventional enemies who do not “play by the rules”. The US Military with its superior firepower, highly trained staff, and technical sophistication, found itself struggling to cope with the fluid tactics and organic decentralized networks deployed by Al Qaeda in Iraq.

This was not a war of planning and discipline; it was one of agility and innovation. To describe the situation they used the acronym VUCA (Volatile, Uncertain, Complex, Ambiguous). The US had built an “awesome machine”, an efficient military assembly line so to speak, but it was too slow, too specialized, and too efficient to deal with a VUCA environment.

Even with superior surveillance capability and big data analysis, the best the US Military could do was understand what “had happened”. They found themselves struggling to predict what would happen next, and were blindsided by rapidly unfolding circumstances that they had no model or process to deal with. In summary, they could not predict where Al Qaeda would strike, and could not respond fast enough when it did happen.

Management guru, Gary Hamel writes that companies now find themselves in “ecosystems” and “value webs” over which they exert almost no control, giving them little ability to predict or plan their own destinies.

General McChrystal realized that winning was less about tactics, big data, or new technology, it was more about internal culture and a new approach to management. So he restructured his operations to focus on extremely transparent information sharing (“shared consciousness”), combined with decentralized decision-making authority (“empowered execution”).

In the military, respect for leaders is necessary and rigorously demanded. In battle, refusal or hesitation to follow an officer’s orders can spell disaster. At the same time, the rigid hierarchy and absolute power of officers slow down strategy execution and can stifle rapid adaptation by the soldiers closest to the fight.

NASA researched airline crashes and found that a shocking 70 percent of air crashes were the result of human error. Specifically the dwindling ability of flight crews to adapt to unforeseen events, and too much deference to the flight captain. A similar situation occurs in hospitals, where deference to surgeons prevents nursing staff from speaking up and taking the initiative to quickly address arising problems with a patient’s care. They now train flight crews and hospital operating room staff to speak more assertively, and captains/surgeons to be less forceful. The goal is to change vertical command-and-control relationships into flexible, multidirectional, communicative bonds.

It’s moving away from “command and control”, toward “adapt and collaborate”. When each person understands the goal and the strategic context, team members can be trusted to use their creativity and make good decisions in situations where the reality on the ground is constantly changing.

McChrystal also needed to break down silo walls and competitive rivalries between the CIA, FBI, NSA, and all the branches of the military who were keeping information to themselves and not sharing it widely, or fast enough, to the people on the ground who could use it. He used the analogy of the prima donna baseball player who prides themselves on their personal batting average, while the team they play for consistently loses the game.

More than once in Iraq they were close to mounting capture/kill operations only to learn at the last hour that the “enemy” there were targeting were in fact “friendlies” working undercover for another US entity.

It was impossible to become one big team. They needed to become a “team of teams”. This required every team and all the players on the ground to possess a holistic understanding of the interaction between all the moving parts of the coalition forces.

McChrystal believed that “cognitive oneness” can be achieved in larger organizations if everyone commits to the disciplined, deliberate sharing of information. To achieve this, leaders must fuse generalized awareness with specialized expertise.

One of the initiatives General McChrystal put in place was to have 7000 people dialing into a 2-hour video conference, 6 days a week. Each department got a 4-minute slot. The “status update” portion would be covered in the first sixty seconds, and the remaining 3 minutes would be filled with questions from the General and his staff. This allowed coalition members to see problems being solved in real-time and for everyone to understand the perspectives of the General and his senior leadership team at JSOC headquarters.

To reinforce empowered execution, the General would ask subordinates who were giving their updates to state what decision they would make if it was up to them to decide in front of everyone on the conference call. He expected people to bring decisions and recommendations they had already thought through. Was he worried about security leaks? Yes, but believed the benefits outweighed the risks.

He also put in place an embedding program, where members from different organizations and branches of the military were assigned to other groups in the coalition to see how things look from other perspectives and build more personal interdepartmental relationships e.g. he would place special forces commandos with civilian embassy staff, surveillance analysts with front-line military units, etc. When people understood the whole picture and formed personal connections they began to trust their colleagues in other departments better.

But the biggest initiative once the information was shared on the conference call, and the General’s thoughts about the issues were made known, was to let people make decisions without needing to consult the General. The speed of the organization increased as he pushed decision-making authority further down, and surprisingly, the quality of decisions actually went up.

Perhaps the biggest transition was for McChrystal himself. He realized that the role of the senior leader was no longer that of a controlling puppet master, but rather that of an empathetic crafter of culture. The heroic “hands-on” leaders whose personal competence and force of will dominated battlefields and boardrooms for generations in the past have been overwhelmed by the VUCA environment (Volatile, Uncertain, Complex, Ambiguous).

The General began to view effective leadership as more akin to gardening than chess. The gardener creates an environment in which plants can flourish. The mental transition from the heroic leader (chess master) to a humble gardener was not a comfortable one for him to make psychologically. The temptation to lead as a chess master, controlling each move of the organization, had to give way to that of a gardener, enabling rather than directing.

But the gardening approach to leadership is anything but passive. The leader acts as an “Eyes-On, Hands-Off” enabler who creates and maintains an ecosystem in which the organization operates.

My business lessons from Team of Teams:

Whilst a 2-hour video conference for all staff 6 days per week is probably excessive for most SMB sized companies, I fully agree that a culture of radical transparency has benefits that outweigh the risks, and implementing it is worth any initial discomfort people may feel. Use software to allow every person to see what each department and each staff member is working on and how well (or not) they are performing.

I’ve also used a daily companywide briefing process done in text form, asynchronously, by staff working around the world. Everyone posts their updates before a designated time in their local time zone. As the virtual “daily huddle” process unfolds throughout the world every day, it lets everyone in the company see what each individual is working on, what their #1 Priority for the following day is, and what obstacles they are experiencing that they need help with.

The goal is to achieve “cognitive oneness” through the disciplined, deliberate sharing of information, fusing generalized awareness with each person’s specialized expertise.

Overcoming Cognitive Bias
How to be Great At Work